Our first stop after leaving Crystal Rivers, Florida was Panama City Beach, Fl. We decided to stay at Wal-Mart, to save some green stuff. After lunch we went across the street and did our walk on the beach. It was a beautiful sunny warm day. Lots of people on the beach. Mostly college students, but some families and older people like us. That night was the noisiest night to date. With squealing tires, gunning engines, and groups of young people hanging out in the parking lot, all hours of the night. It was not a smart move to stay at Wal-Mart during Spring Break.

Our next stop was at Henderson State Park in Destin, Fl. I do believe this is my favorite State Park, so far, as facilities go. It is located smack dab in the center of Destin- so the location is great! When you drive into the park you have nice internal roads, (not gravel- Mally hates to walk on gravel!) 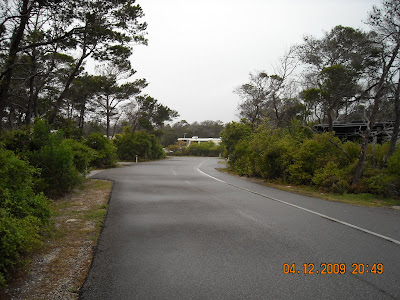 All site are private. 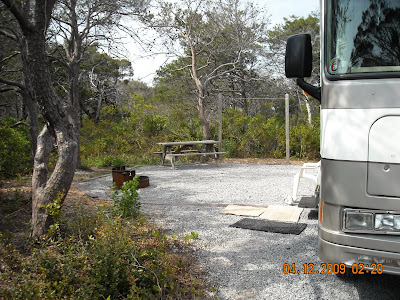 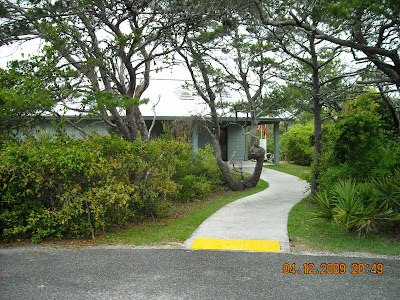 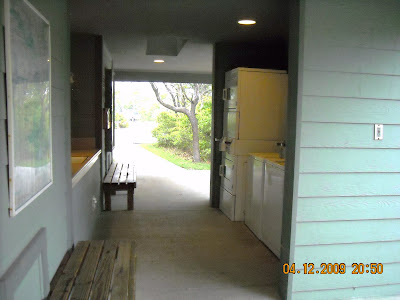 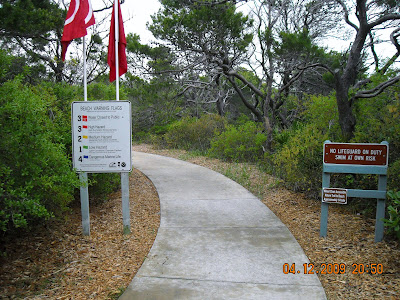 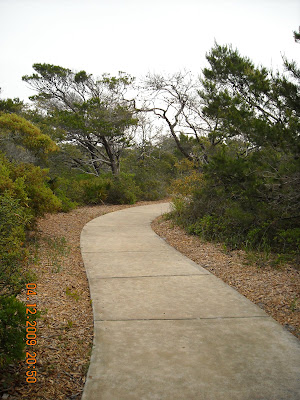 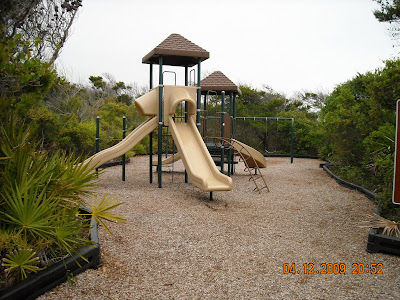 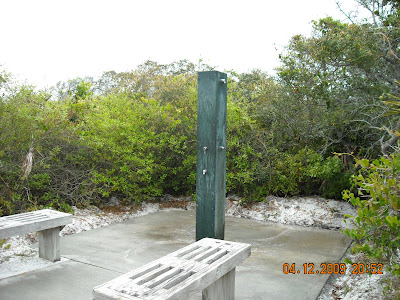 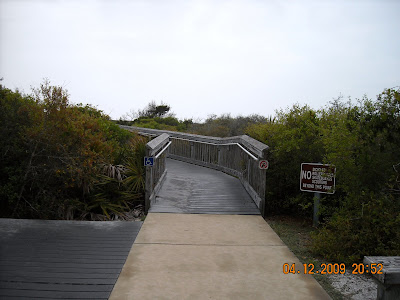 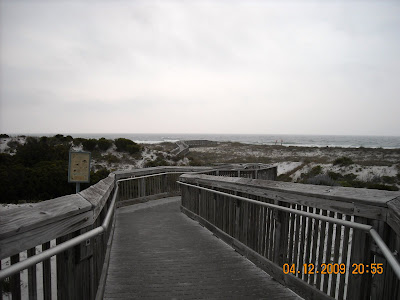 Pretty flowers in the white sand 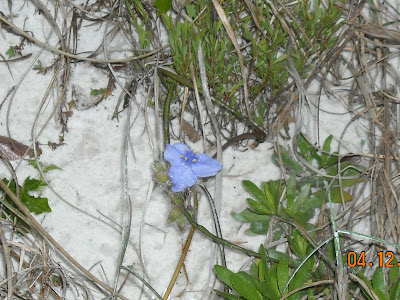 Unfortunately, we are leaving today. We arrived yesterday, and only could get in for one day, and we need to be in Iowa the 1st of May for appointments. So I am running around, getting pictures of this place, before our check out at 1:00 PM. Joe and I started to take a walk on the beach, after breakfast, but it started to rain, so we headed back to the Nest. As soon as we got back, it stopped raining, so I decided to get pictures. A storm is suppose to roll through here, and be gone before 1:00, so we decided to stay till after the storm. 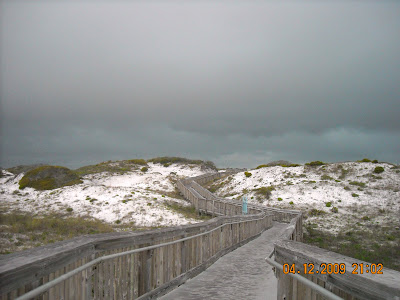 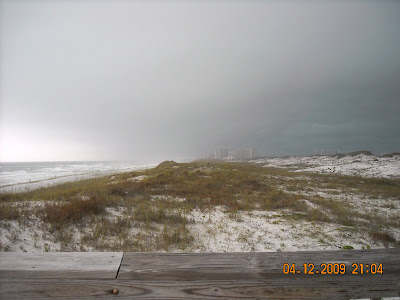 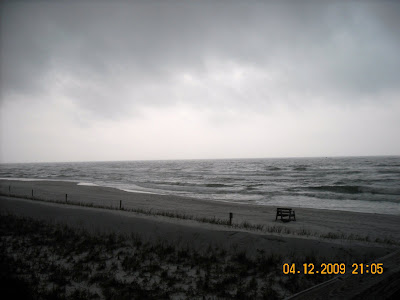 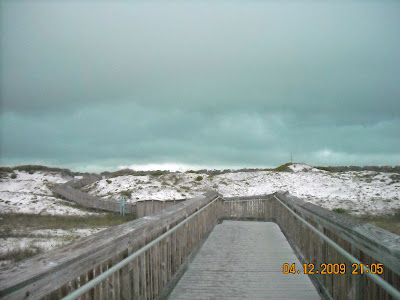 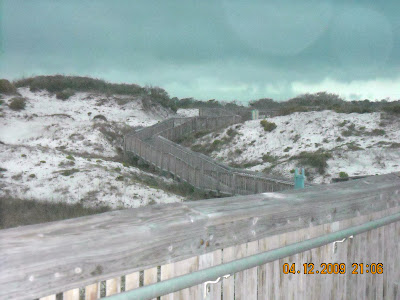 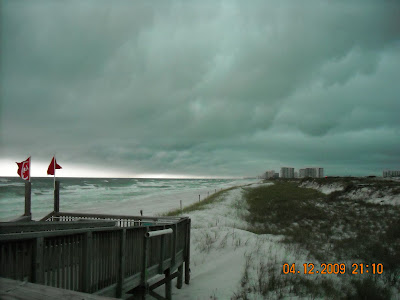 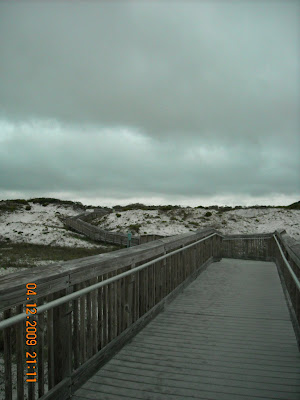 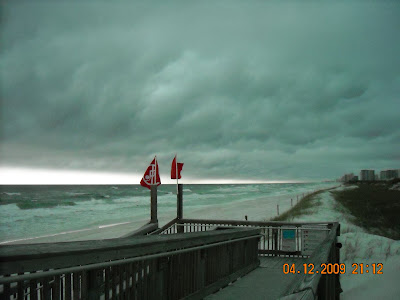 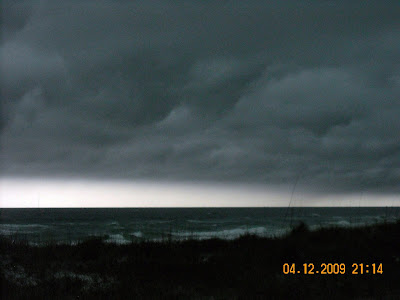 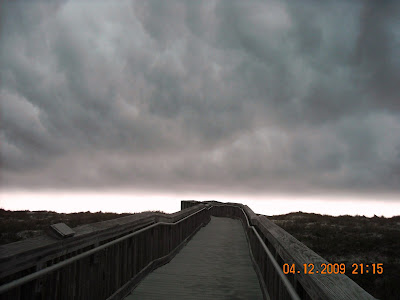 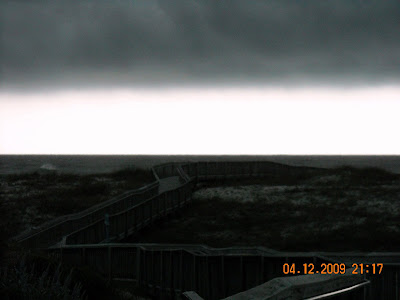 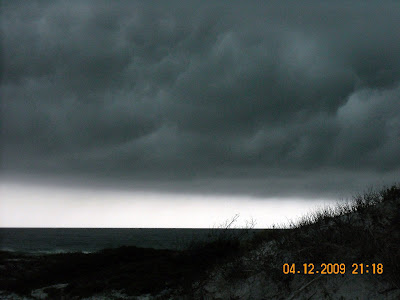 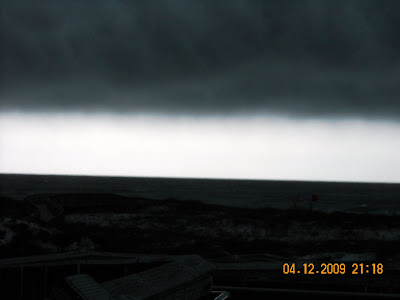 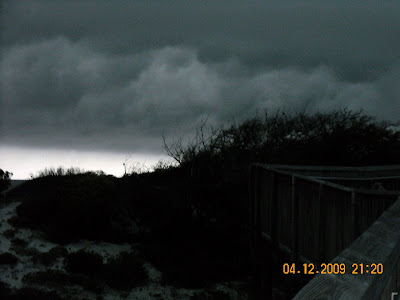 Time to head for the Nest. It was very quite & peaceful watching the storm roll in, but I am starting to feel a few rain drops. As I am heading back to find protection from the storm, I see this flower in the sand. There is always beauty, even during the storms! 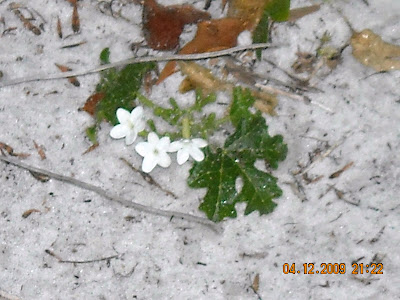 As I get close to our Nest, I see Joe coming, and says, "I was starting to wonder where you were at." We get back home, and the storm hits. The storm lasted much longer than it was suppose to. There were hundreds of lighting strikes, and the rain was very heavy. We started to get a leak around the bathroom vent fan. Then we start to get a leak above the TV, located above the passenger seat. We just had someone fix the antenna in Crystal Rivers. Evidently he did not

seal his work well. We had to shove a towel between the roof and the TV and around the vent fan, until it stopped raining. The people that have our lot, after we leave today, kept driving by to see if we had left yet. Before it started to rain they asked Joe when we were leaving. We told them we were not leaving till after the storm. At 12:30, it is still pouring with much thunder and lightening. At 12: 50, it is still raining, but starting to slow up. The storm was suppose to have past an hour ago. At 1:00, there is a knock at the door. The park ranger said we have to leave. (we had called them earlier during the storm , and told them our plight. They said they understood, and to leave as soon as we could). It was still raining, but a little less as Joe went out to unhook. After unhooking we drove to the dumping station. It was still lightening, so I told Joe we should just wait, till the storm passes. You know men, they never listen to you. He goes out with his umbrella, (which I also told him he should not hold during a lighting storm) and dumped the tanks. He talks to another man (who I am sure didn't listen to his wife either) who had pulled into the park and was dumping on the other side of the dump station. After Joe was done, we drove across the street to Wal- Mart for the night as it continue to rain. We will definitely revisit this park someday.
Posted by diane-j-m at 8:05 PM No comments:

Summary of Adventure since we left Crystal Rivers Fl.

I have been having many computer problems, since April 12 and on. The problems come and go and have really frustrated me. I am still having troubles, but will attempt to get you all caught up, as I am going to send my computer to Dell to have it checked out, and it may take 10 days before we get it back. I am going to give a quick summary of the past 2 months of our route, and then go back later and fill in the details for our records. After leaving Crystal Rivers, Fl., we drove back to the Florida panhandle to Panama City's Wal-Mart for a night. We stay at two other campgrounds, which I will tell you about later, and then arrived at Gulf Shores, Al for a week. We spent the week with our girls and grandchildren, and then hit the road to New Orleans, for 4 days. From there, we took 2 days to get to Mt. Pleasant and stayed at Wal-Mart and visited my older sister Karen, and her daughter, Tami. Next to Cedar Rapids, Ia, our home town to visit our moms and to make some yearly appointments, (doctor, dentist, vet and etc), and visit our church family at Spirit of Faith Family Church. We stayed in CR for 2 1/2 weeks, and then headed north to visit my friend Barb in Charles City, Ia, and to check out our Mobil Home Park in Mason City, Ia. From there we went on Hwy 35 to Minnesota, and then across to Wisconsin to visit my younger sister, Nancy in Two Rivers. We are presently parked in their driveway and plan on heading to northern Wisconsin June 1st. Just wanted to let you know we have not fallen off the face of the earth, and are Blessed and happy.

Posted by diane-j-m at 2:37 PM No comments: Links to this post