Car Trip across the Mingus Mountains to Prescott

10/29/09
We were originally going to drive Hwy. 89A to Prescott, AZ from Cottonwood with the RV, until we took this road to Jerome in the car and saw signs saying no vehicle over 50 ft. was to take this route. We are 36ft and you add the car and tow package and we get close to 50ft. Later we met a couple at our campground who told us they had taken their RV and car on the route, a year ago, not knowing they shouldn't. When they saw the sign, they had no place to turn around. They told us when they arrived at their campground and they told people they had taken that route with a RV and car, soon everyone had passed it on and everyone was talking about it. I wanted to take the drive, but Joe said I would have to drive, because he had enough of mountain drives, and now that we were in Arizona he thought he was going to be on flat ground. 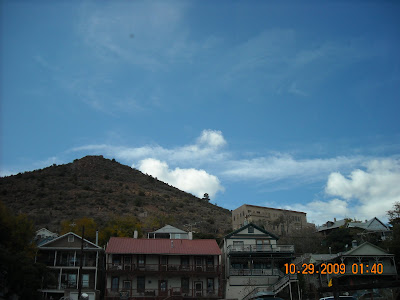 I drove up to Jerome, 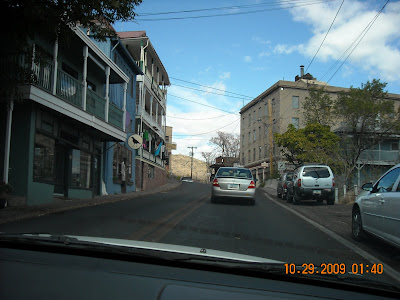 It was a beautiful but chilly day. Good day for a car ride. 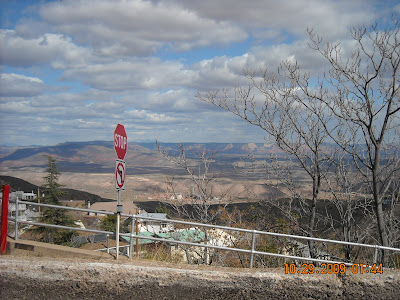 Mallery got to come with us, because if we had to leave her in the car, she would be fine. 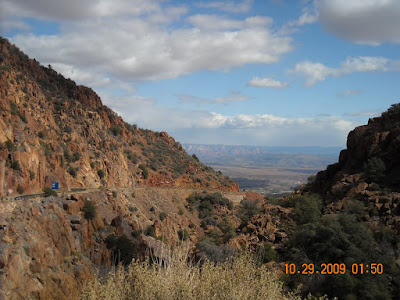 Then I drove up and over the Mingus Mountains. 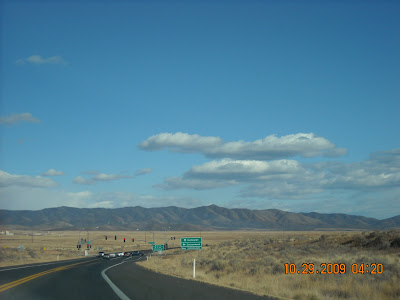 Heading down into Prescott Valley. I was blessed because I was hugging the mountain wall and going up most of the way. We drove through Prescott Valley to Prescott, and stopped in the downtown square. I got to go into one shop before we headed back. 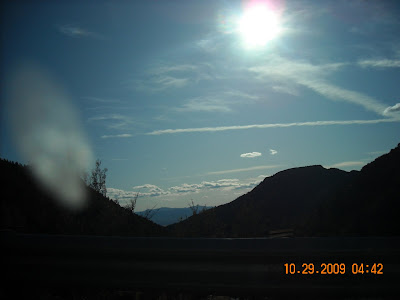 Then we took another route to Prescott Valley to head back home over the Mingus Mountains. 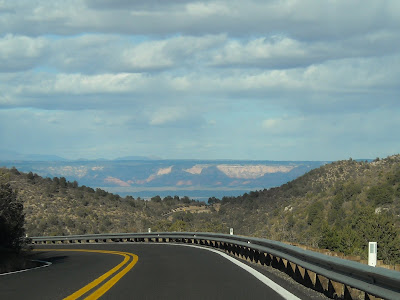 Because Joe knows I don't like going down the mountains, Joe drove back. 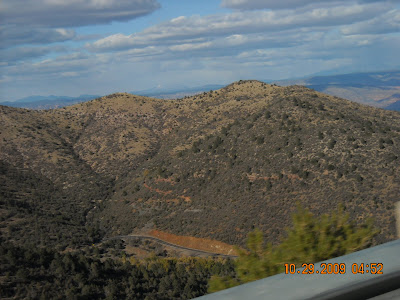 We are pretty much at the top here at 7000 ft. See our roads down below. 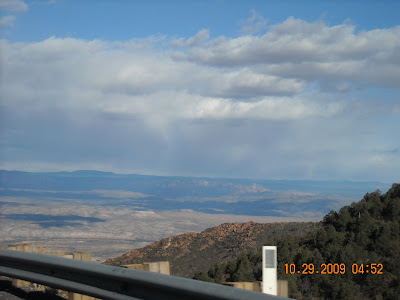 Joe and I are exact opposites. 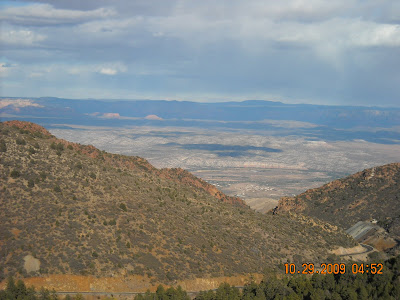 I like going up. Going down is what freaks me out. It's like being on a roller coaster. 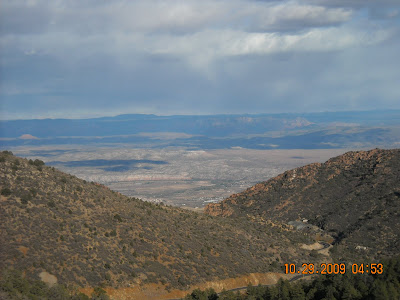 Joe doesn't like going up, because it means he is going higher and he becomes more uncomfortable. 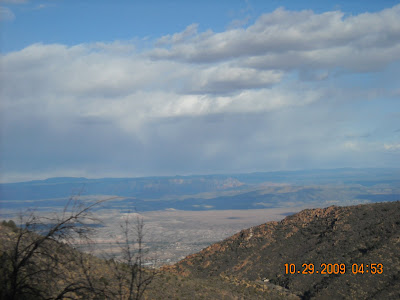 When he is going down he knows he is getting closer to the bottom, so he feels more comfortable. 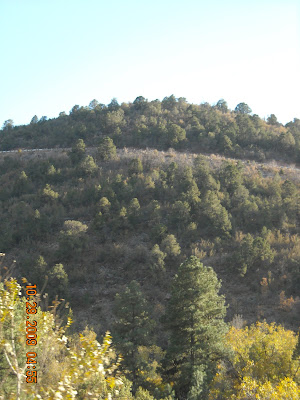 Road above we just came from. Joe is more comfortable after he has driven the road, because he knows what to expect. 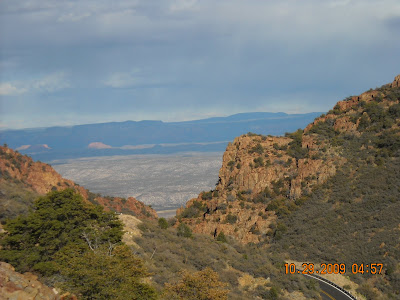 I am better off not knowing what is ahead, because I don't worry about what I don't know. Once I have seen the road I am more apt to worry about it and dwell on it and develop anxieties. 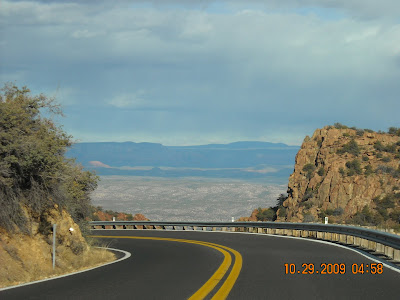 Most of the trip back is down and Joe has seen the road. Even though he has to drive the side with the drop offs, he does fine. 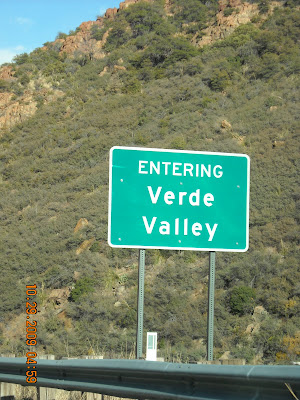 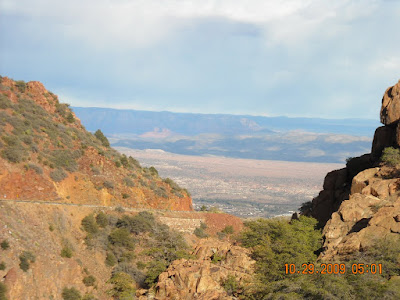 So I was glad Joe offered to drive back home. 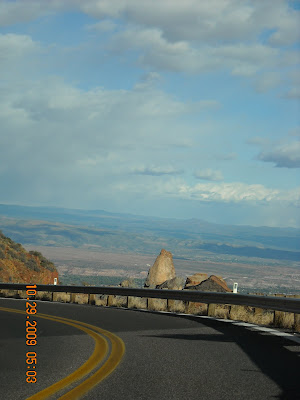 Most of the drop offs had guard railings, but it still give me the he be ge bes! 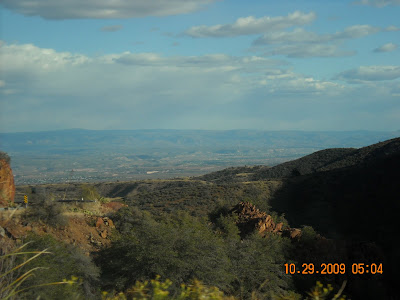 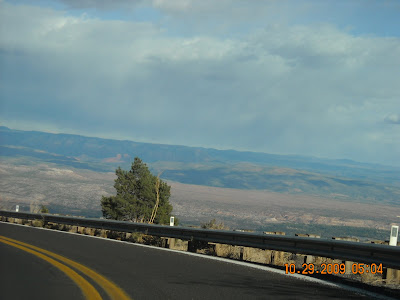 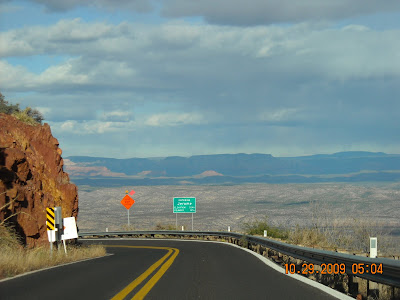 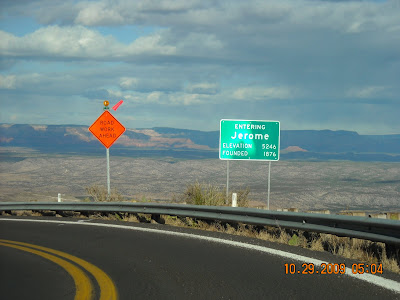 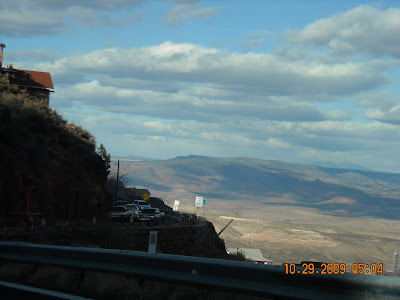 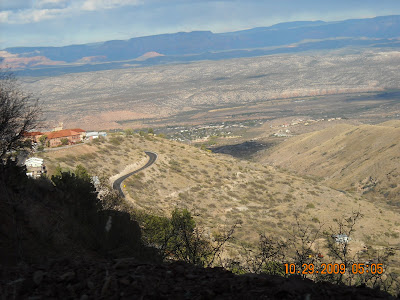 with Cottonwood below at 3200ft. 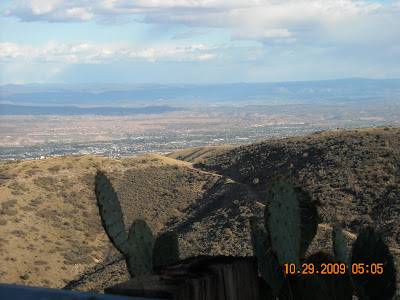 Jerome was established in 1876 for mining. 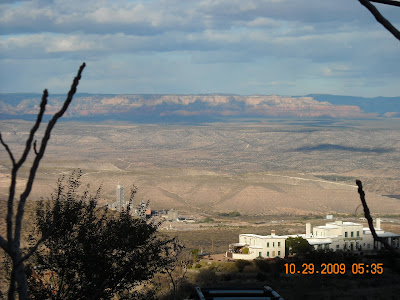 Sedona's red rock out in distance. 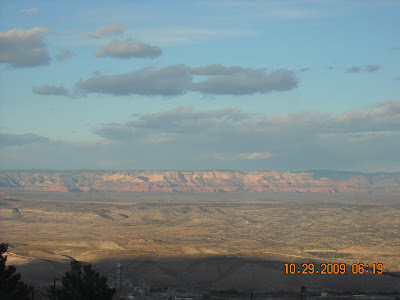 In Jerome we had dinner at the Haunted Hamburger, which has the best views in Jerome for dining. Can't say that much for the food though, one reason we don't eat out a lot! We always get disappointed with the food we get for the price.
Posted by diane-j-m at 7:03 PM