Today we going to Old Tucson Studio. This is a studio location that many western movies have used to shoot much of the movie they were making. It isn't used as much as in the past. Many of John Wayne's movies were shot here. Some of Clint Eastwood's also. Many old movies from before my time as well. 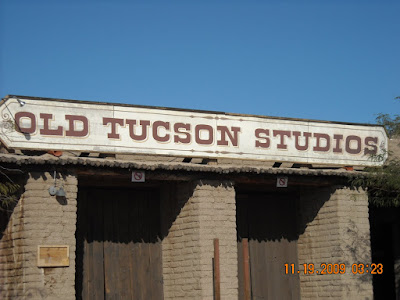 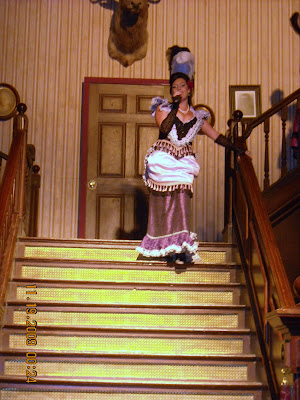 They have short shows and reenactments that they do throughout the day to entertain us tourists while we look around the town. This one is called Miss Kitty's Can Can Review. It takes place in a saloon/hotel prop that has been used for many movies. 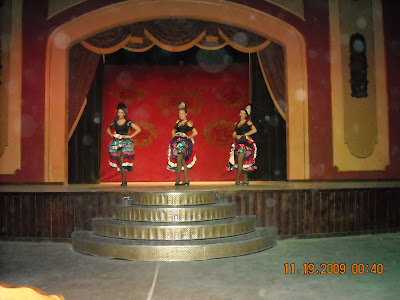 The girls doing the Can Can. 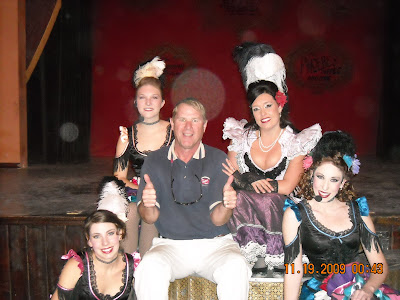 At the end of the show you can come up and have your picture taken with the girls. I didn't want to but Diane wanted the picture for her blog, so here I am, hamming it up. 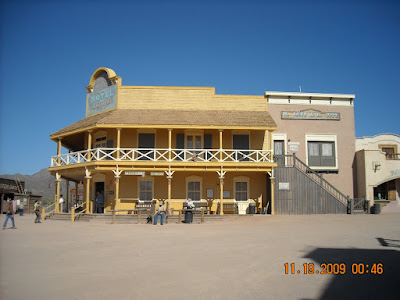 This is the main street of the western town. This building is the saloon and hotel. 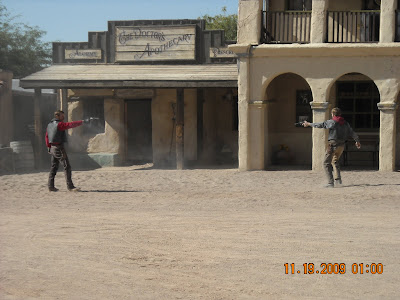 This is more of a Mexican hotel look, with a reenactment of a gun fight taking place.

Most of the building are made to look like different locations in the old west, so no matter what location the western might take place, all of it can be filmed in one location. They often paint or change the look of the buildings for a particular movie and then change them back after the movie is completed. They have a lot of movie photos of how this was done. 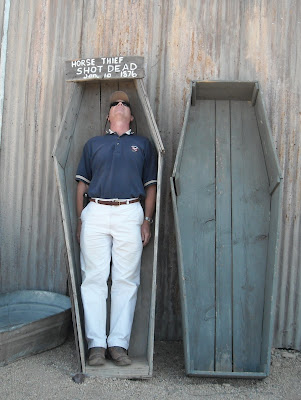 After a long day, 4 hours of walking around this movie set town, it was time for a break. 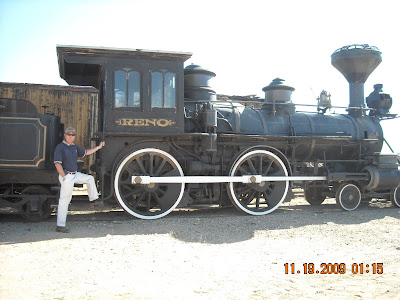 I finally finds a place where his Crandic Railway shirt and hat fit in. This engine has been used for more movies than any other engine in the country. We (I mean it) looks pretty good for its age. 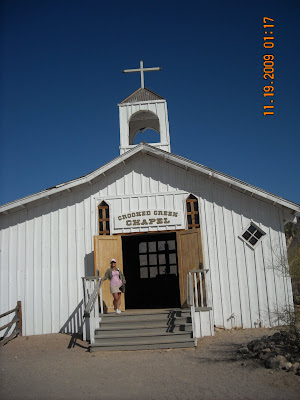 Diane, naturally gravitates toward the religious aspect of the town. This chapel has be used in many movies and comes with its own cemetery as well. I think this church was used for "Little House on the Prairie". 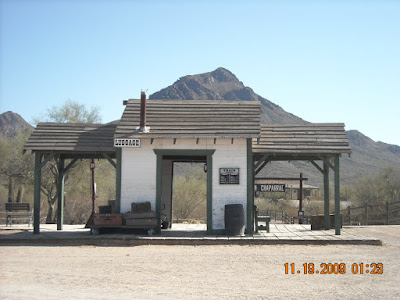 This railway station looks kind of small and out of place, but you put a lot of actors and action in front of it and you wouldn't even notice it's simple look. Ahh the magic of movies. 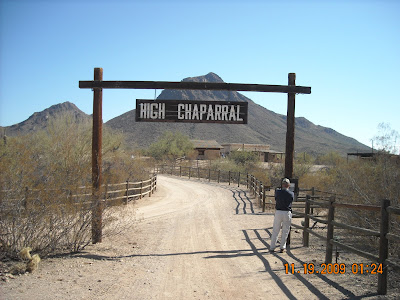 This is the complete movie set for a show call High Chaparral that was a weekly show on TV when I was growing up. This is the entrance to the ranch and the main buildings for the ranch are in the background. 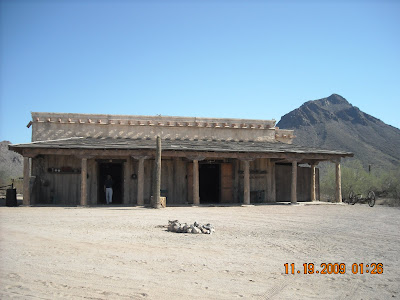 This is the main ranch house. 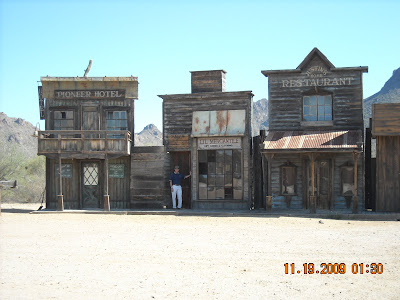 This is a set of buildings used for a town look, even though there are only 3 buildings and there is nothing behind these fake fronts. 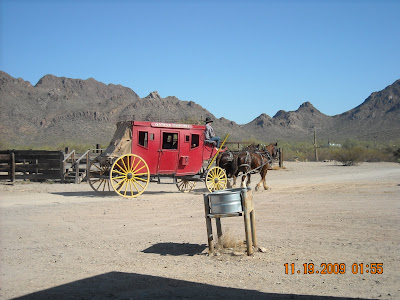 Of course you can't have a western without the the good old stage coach. You could even go for a ride around the town in it for $3.00 a person. I was tempted, but decided to pass. 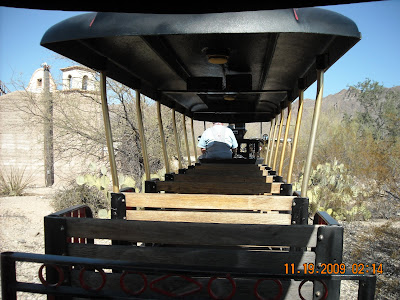 Instead, I found this miniature train that would take you around the outside edges of the town, and it was free. We were the only passengers on board, don't know if that was a good sign or not, but we enjoyed our free ride. 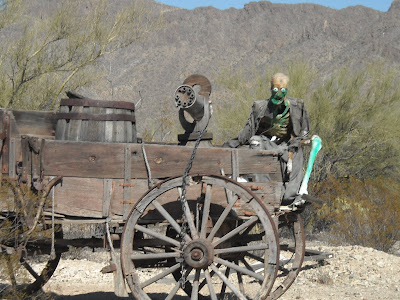 Someone at the studio's idea of a cross between the old west and Halloween? Or maybe this is what happens when you hang around an old movie set too long. 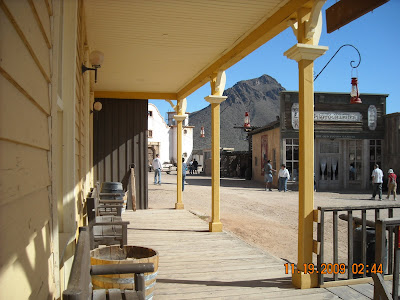 Looking down main street toward the old Mexican mission style church that you may recognize from the many movies it has been in. That is, if you watch westerns, like I do. 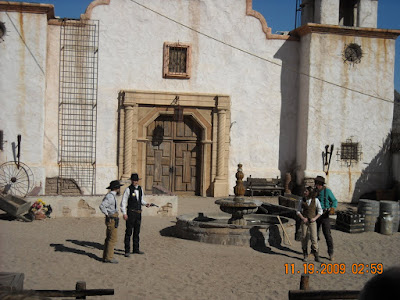 This is another reenactment we watched. 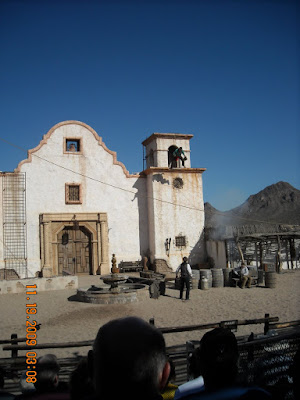 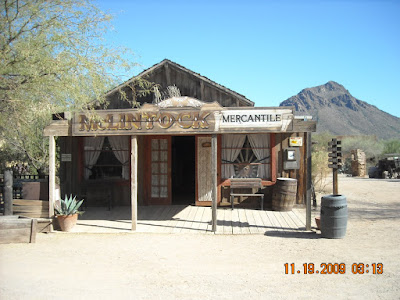 This is the McClintock General Store from the movie McClintock, with John Wayne. Just think Diane, we are walking the exact same streets that John Wayne walked on many years ago. Diane is more interested in the gift shop across the street. 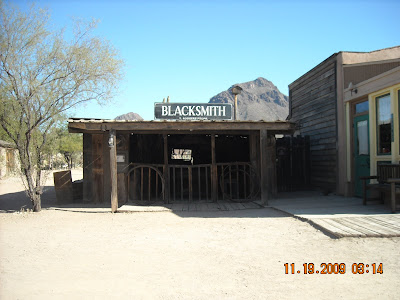 No, not that gift shop.
We had a good time, though I think I enjoyed it more than Diane. Tomorrow we head for the Desert Museum.
Posted by diane-j-m at 11:04 PM