We left New Orleans and took Hwy 55 North threw Louisiana, then into Mississippi. We drove most of the day, and finally stopped at a Wal-Mart in Grenada, Mississippi. We had great driving weather, even though the forecast was for rain. We drove about 5 hours and 265 miles, which is a lot for us.

We left Grenada, Mississippi and head north on Hwy 55. Before we left the state, we stopped at a rest stop, and dumped our black water tanks. This is the 1st state we've found that have dump stations at their rest stops. That's really cool Mississippi. (Does't take much to make a RVer happy. Wish more states had rest stops like that). We went around Memphis, into the upper north east corner of Arkansas, then into Missouri. We were looking for a truck stop or a Wal-Mart to stay at for the night. We went to one truck stop that we found in the Interstate Exit Authority, a book that a friend gave us, but the truck stop was no longer there. The book is 10 years old and has served us well in most searches. We have tried to get an updated book, but the last publication was in 2001. Too bad, it was a great book. We had to go by our GPS to locate the nearest Wal-Mart. The GPS does not give truck stops. It was getting close to 5:00 PM, (Joe's quitting time) and we needed to find our stopping place. There was a Wal-Mart in Eureka, Missouri which was about 15 miles off the interstate. We decided on this Wal-Mart even though it was out of our way a bit. What a mistake, we ended up on a curvy, hilly and narrow road, with Joe wondering, what he might run into next. 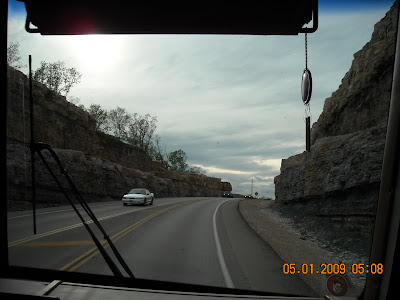 Joe does not like roads that have narrow shoulders. In case of an emergency, he might have to pull over! 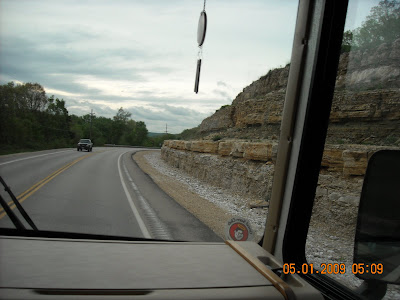 Joe was not a happy camper. The roads got more curvy and narrower than these pictures. I didn't take pictures, because I felt I needed to help by watching the roads for Joe and keep track of turns on the GPS. I am the navigator after all, and have a serious job to maintain! I can't be having fun taking pictures all the time. 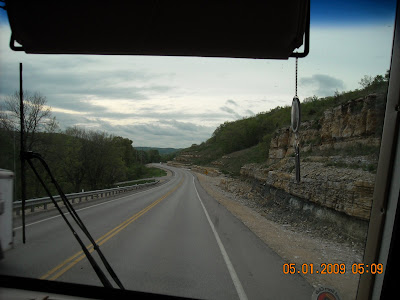