Going to see my Best Friend

After our night at the truck stop in Center Point Iowa, we headed to Charles City, Iowa, to see my best friend Barb Hoppe, who I went through Dental Hygiene school with. We were the only students who had children, so we really had a bond from the 1st day. She was my one and only Maid of Honor/ Bride Maids at Joe and my wedding 16 years ago. She has been frustrated with me because, I haven't been up to see her for awhile. I am glad I am going to see her today. She has made several trips to Cedar Rapids to see me, so we are making an extra effort to see her before we leave Iowa again. Her brother, Mike Molstead, owns a Chevrolet Dealership in Charles City, and said we could park our Nest for the night behind the dealership. It was a rainy day, but that's OK because we are just going to go over to Barb's house to visit and then go out to eat. 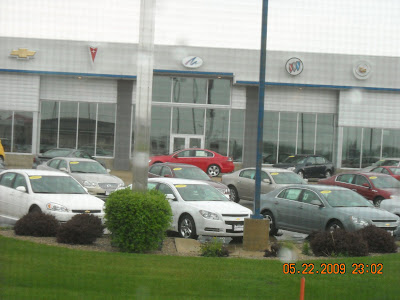 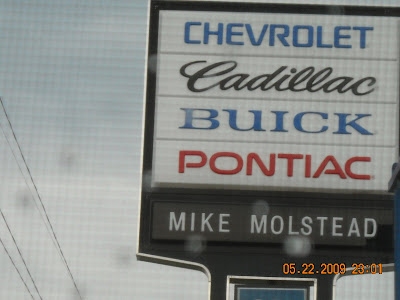 We parked at the very back on this side of the building. 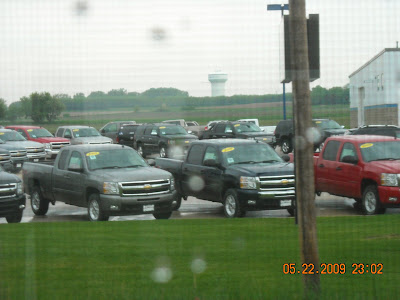 We had a great time visiting with Barb and her boyfriend Steve. I got to see her three son's, Ben, Chris and Cole, who had all really changed since I last saw them. They took us to a Pub & Grill in
Osage, a small town north of Charles City, called Teluwut. We had a great time catching up and like always, I forgot the camera to take pictures of them. Like I've said before, I need to tie it around my neck. The pics of Barb's brothers dealership were taken as we drove away the next morning. It was raining also as we left. I want to give Mike a BIG thank you for letting us stay at his dealership for the night, and if you need a car and in his area, he is a great guy to work with. Bye Barb, take care and don't work so hard as a Hygienist, or you'll end up like me, not working.( which after all, has not been so bad- just blessed to have a husband that saved).
Posted by diane-j-m at 10:40 PM