We drove across town to stay at our next park, The French Quarters RV Resort, which was just 3 blocks to the French Quarters in New Orleans. Our 1st night stay was $33.00, because we could use our passport membership. Our 2nd night was the regular charge of $66.00. I wanted to stay here for a couple of nights, because of the closeness to the French Quarters. The park was a very nice place, but the most expensive to date and had a lots of sand burrs in what grass they had!


This is our 1st park with brick pavers , street lights, and a gate to enter the Park. Note the highway at the end of the park. We were glad we were not put back there, because it was very noisy. 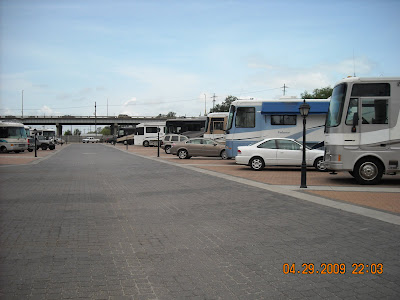 There was a cement wall around the whole park. 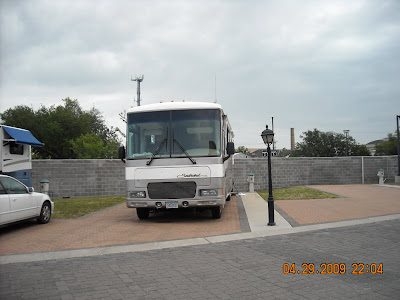 Looking out our front window, you could see the front door to the park office, which had 24 hour staff security. Note the city in foreground. After arriving to our new yard, we asked the front desk, if it was true what we had heard from our previous shuttle bus driver. He had told us when he found out we were coming here, next on our route, that even though we were only a few blocks from the French Quarters, we were only a few blocks also from the projects. In order to get to the French Quarters we would have to walk through an abandoned parking lot, and he highly recommend us not to walk to or from the RV park at night! The office staff agreed with what we were told. (Mallery in right corner of picture, if you are wondering what that is) 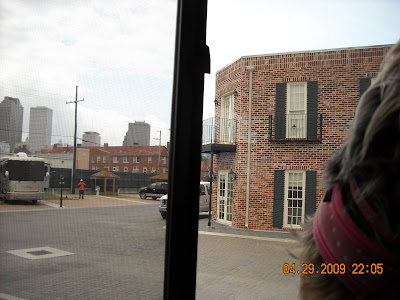 Nice bush on other side office. I like gardening. 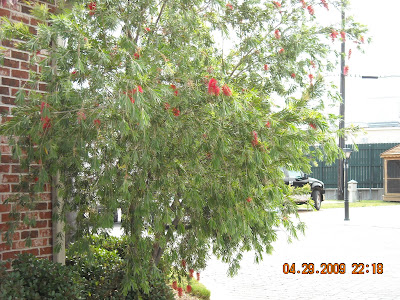 Pretty flowers on the bush. 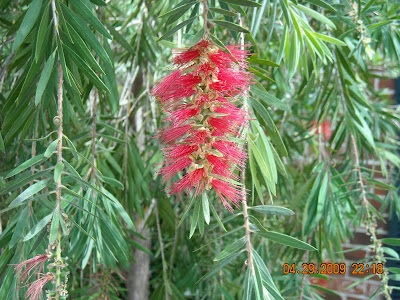 Wall behind our nest. 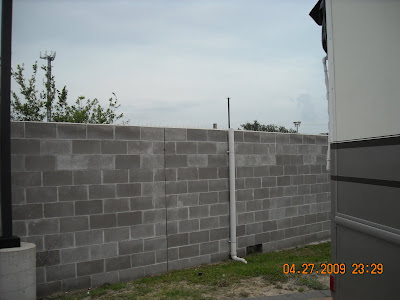 Razor wire on the wall! 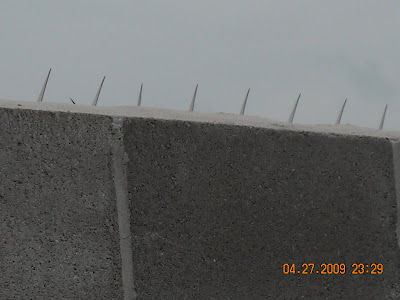 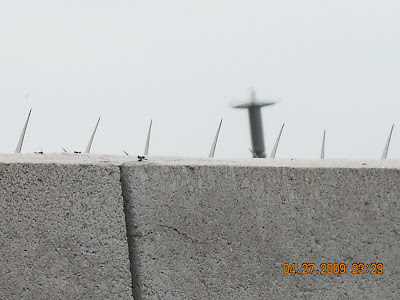 Pool with laundry room and his & her bathrooms. 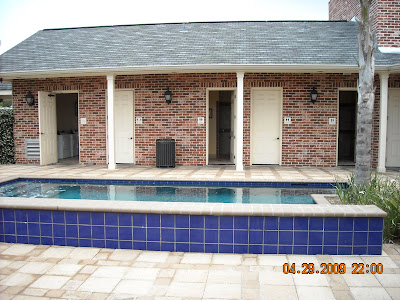 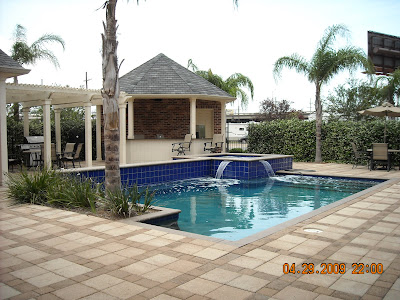 While in the French Quarters one day we asked where we could go to get authentic New Orleans food at a reasonable price. We were told to try Coop's down the street. On our way to Coop's we saw this kitty cat, enjoying the day. 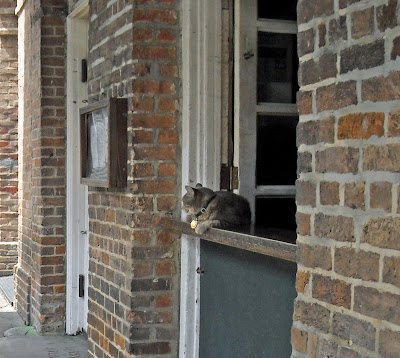 Coop's was so dingy and dirty inside, that I could not enjoy my lunch. Joe ate most of our Jambalaya, and whatever else was on the sampler platter we shared. Joe wasn't impressed, but ate it, because he paid for it. I would suggest, when in New Orleans, pay more, if your stomach turns easily like mine. There was a cat inside the place walking around and jumping on tables and window sills. When I went to the bathroom, it was outside in the back, where there was a guy out in the back preparing food. If we hadn't put in our order, I probably would had suggested to Joe to leave. ( I know this picture makes the place look nice, but trust me it was dirty) 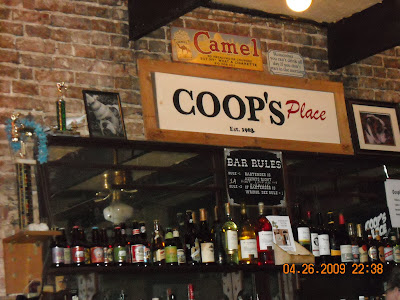 On a"Before and After Katrina bus tour", we saw many abandoned neighborhoods, with houses boarded up. Many left because there was not enough infrastructure to support them. Many can't afford to rebuild. And many are not wanting to rebuild and live in an abandoned neighborhood. We could see the water line on the homes that were flooded, and the big x's on the doors and the number of deceased if any in the homes. The French Quarters were not touched by the flood, but have been touch by the drop in tourism, the years following Katrina. Our bus tour is one of the many ways, that is helping the city to get back on their feet. We saw strange looking houses Brad Pitt was building to help the city rebuild. Halfway though our tour we stopped at this park for a potty break ( 3 hour tour) and saw this ugly bird. I'm sure Dawn and Renee know what kind of bird or duck it is! 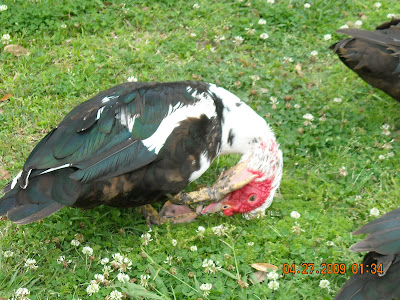 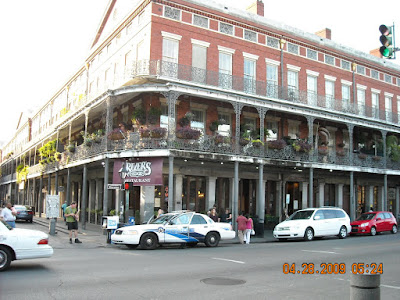 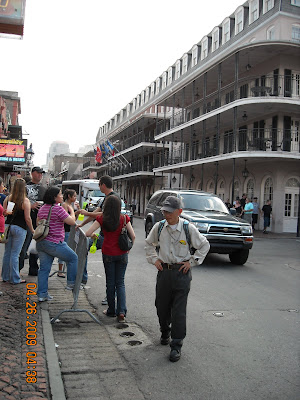 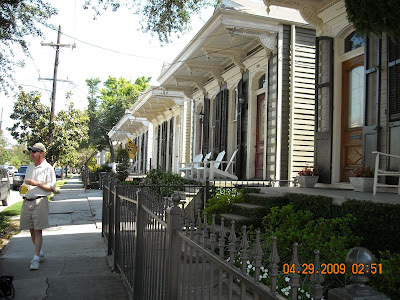 This home has many different architectural styles, but I liked it! 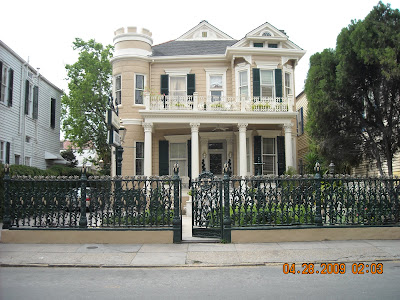 We sat at the Cafe Du Monde, which has been here since 1862 and had coffee and beignets, ( fried donuts) while listening to New Orleans Jazz. These guys were great. The horn player just walk up and joined in while the guitarist was playing. People left tips for him in his guitar case. On the guitar players break he would walk across the street, leaving his money in the case, have a cigarette with other guys who were just hanging out and sneakily snorted something 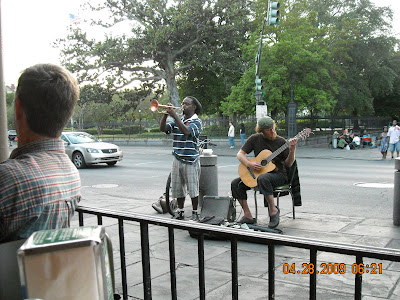 One day we walked to the French Quarters for dinner. We ate at an outside cafe and had a muffuletta sandwich. This is another signature New Orleans food. After dinner we walked around and stopped to listen to New Orleans jazz. We call for a cab, which cost us $10 with a tip to go a few blocks. 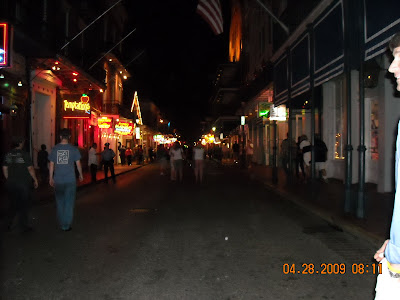 This 3 legged dog was on a leash, as the owner sat inside a bar. 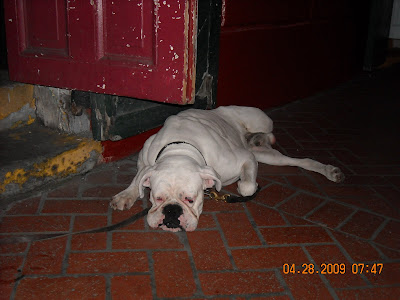 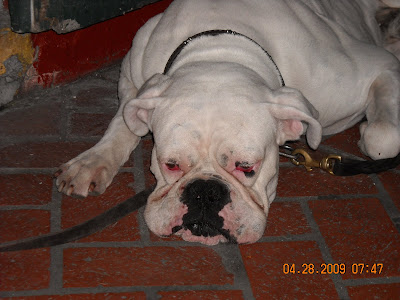 On our last day we walk to the cemetery, just two blocks from the RV park we are staying at. In the background you can see the brick projects apartments. 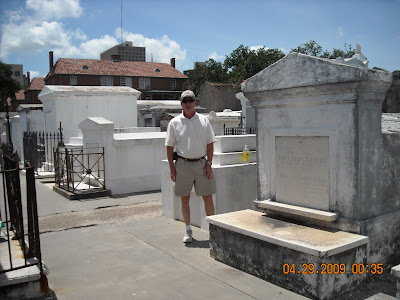 This grave is of a famous Voodoo women. Things have been left all over the grave, by those who idolize her. 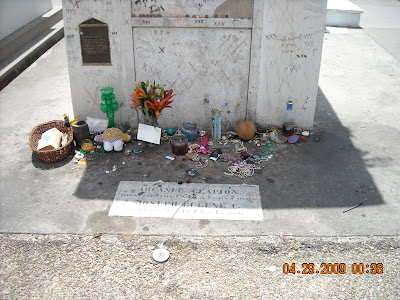 Later that day we bought daily passes and rode the street trolleys to the Garden District where all the big beautiful homes are located. A very talkative 20 something young lady told us we should get off the trolley and go to Magazine Street where there was great shopping. Just what Joe wanted to hear! So we got off and got our exercise by walking at least 8 block there, ten blocks past the shops, (stopping at just a few) and back to the trolley. It was neat watching the operator run the originally trolley's and dinging their bells, to warn people to get out of their way. At the end of the route, all the chair are flipped around, and the operator drives from the other end, (controls on both ends of the trolley). After we got back down town, we hopped on the Canal Street trolley, which is the poorer district of the city. On the way back, we jumped off one block too soon, because I thought it was a shorter walk to home. It was shorter, but it was a walk right in front of the projects. It was too late to turn around, as we realized where we were at. Two guys were hanging out in front of their place. Garbage all over the ground. I put my eyes to the ground, and didn't look up, heart starting to pound. We walked as quickly as we could pass the buildings and men, acting like this was a normal walk. Boy were we glad to get back to our place! 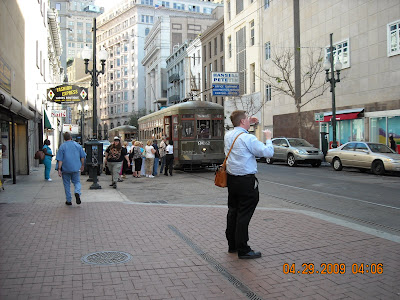 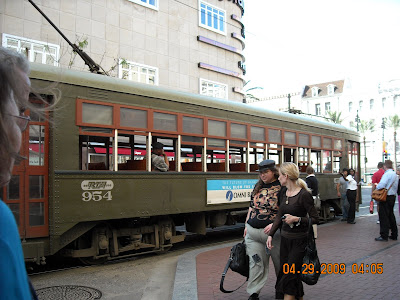 We went up town for another muffuletta, for dinner our last night. Joe wanted to drive up town to avoid another taxi cost. We couldn't find a parking spot, but on the outer edge of the French Quarters. I was a little nervous walking in the unpopulated French Quarter area at night, but Joe kept telling me, we would be fine. Our car was parked on the other side of the cemetary, on a main street. We got to our car, and drove through the abandon parking lot to get home. All in all we had a great time, but I will say there is a lot of sin, darkness & evil in the city, in my opinion. I would not recommend any elderly people to visit the city, as the sidewalks and streets are buckled with uneven cement and bricks, causing even the young to trip. Joe and I both thought the city would be cleaner also. It appeared to be dirty and not as we expected. I suppose Katrina has not help in this matter, with lack of funds for these project, and money going to rebuild bridges, road and other pertinent needs.
Posted by diane-j-m at 11:55 AM