The Great Sand Dunes of Colorado

Our campground is 7787 elevation, which is the highest elevation to date we have camped at. Neither of us have had any altitude sickness or effect since we left the Black Hills. In the Black Hills I was sick the next morning after we arrived, at an elevation of 5600. But since then, we have both done fine. I have increased Mallery's dose of Provex, which is an anti inflammatory. The 2nd morning in the Black Hills, Mallery woke up having trouble breathing. I had forgotten to give the Provex to her because she had been doing so well lately. She has trachea problems, and when she gets in extreme conditions, she has problems. I think she was also reacting to the high altitude. She also has been fine at these high altitudes. Our campground is called Blanca RV Park. It is one of those campgrounds that most of the RV's are semi permanent. In other words, most of the people have been here for for awhile. It is a little dumpy, but it was in Passport at $10 a night.This is the 2nd cheapest campground we have ever stayed at. A lot of the people living here are working on refinishing the Hwy going to the park. 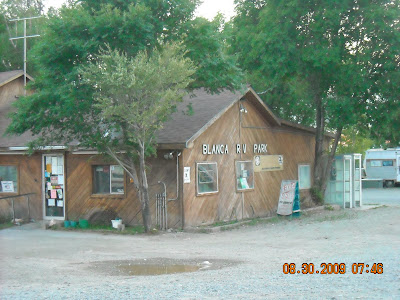 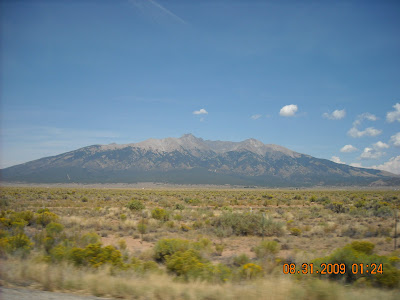 View of Blanca Peak (14345 - higher than Pikes Peak) from our Nest window, which is part of the Sangre De Cristo Mts. 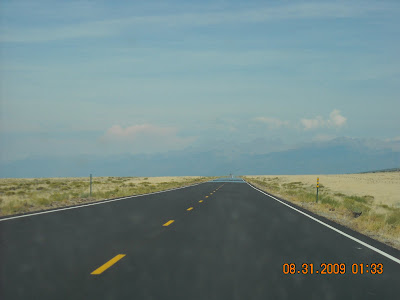 It's a beautiful sunny and clear day and we are driving to the Great Sand Dunes National Park. It is 16 miles to the park from our campground. I just took this picture to show you all how the country side looks. I am now looking down at my camera to see how the picture turned out. I hear Joe saying something like, Oh my God and I look up to see something black flying in the air at us. Then I hear something hitting our car. I found out a big dump truck blew a tire as it was approaching us , the tire was thrown at us. Joe saw a cloud of black smoke billowing out from under the truck, and thought what is wrong with that truck. Then in another split second just before the truck was to pass us coming from the other lane , the tire came flying at us. I am so glad I did not see it. There was smoke and a hissing noise coming from under the hood of our car. We got out of our car and the tire piece was under our car. 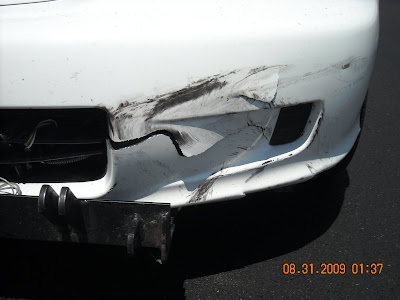 The tire messed up the front of our car and knocked out our air conditioning. That is what the hissing noise was. Another piece of tire hit the side of the car. 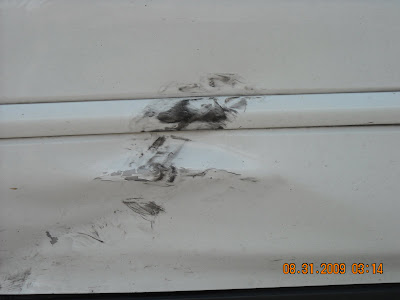 And bent and marred it all up. 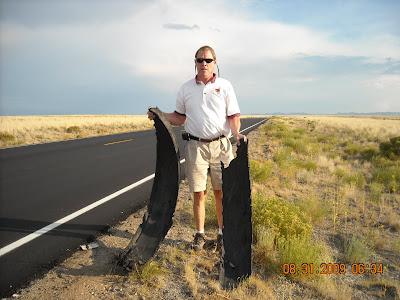 These are the two pieces that hit us, while we and the truck were going about 60 miles per hour. 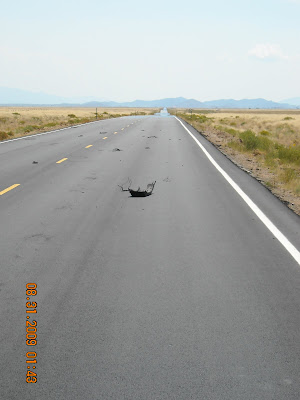 The road with all the tire pieces. The truck never stopped. 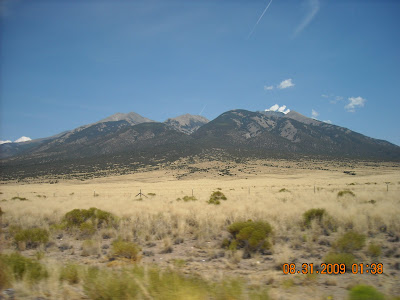 We are just grateful we both are not hurt. I guess I will take another picture as my hands are still shaking from the incident. I stopped and thought how just minutes ago I had ask Joe to pull over so I could get some water out of the trunk. If we had not stopped for that few seconds, would we have pasted the truck before the tire blew? Or would we have been just that much closer and the tire would have hit the windshield and blinded us and it could have been worse! 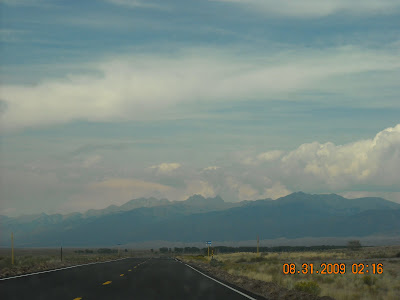 The car still runs, so we head on down the road. It's hot with temperatures in the high 70's. The window are put up and down to try to keep cool. 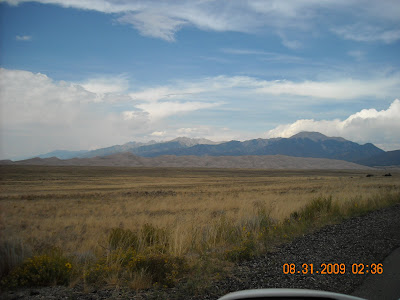 The grasses, Great Sand Dunes, mountains, clouds and the sky. 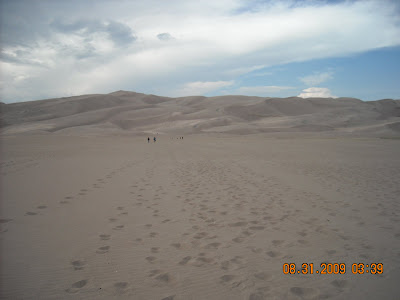 After calling our Insurance Company at the visitor center ( we did not have phone service), we finally get back to the day, and walk out to the tallest sand dunes in North America. See the people way off in the distance. It takes 2-3 hours to climb the dunes to the top. I got exhausted just walking out to the first hills. If it were not so late and we had time for a hundred rest stops, we might have tried the climb. 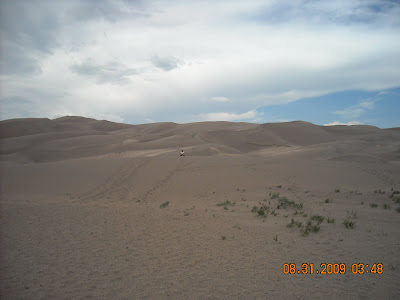 Can you see me sitting on the top of a dune. 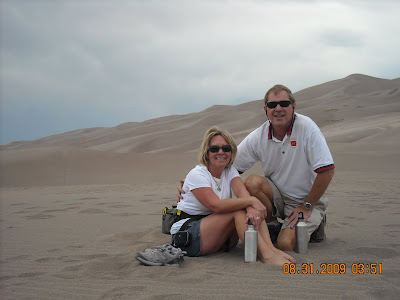 The dunes are up to 750 feet tall and covers more than 330 square miles. 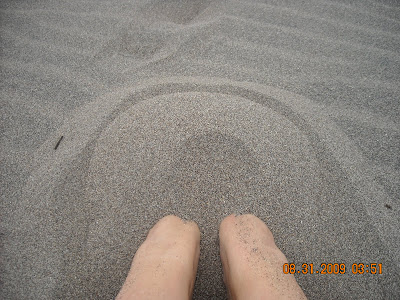 My feet in the sand. Much different than sand on the beach. The sand has a lot of Magnetite, which is all the black in the sand. Seven species of insects thrive here and nowhere else in the world. 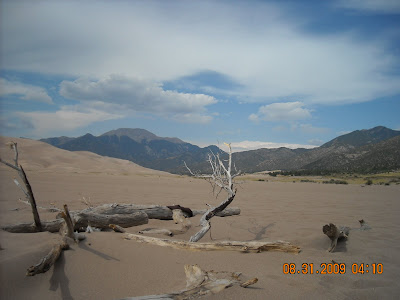 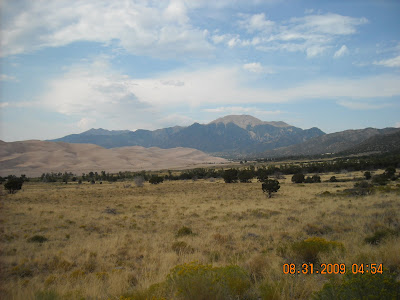 A shot of the dunes from the visitor center. 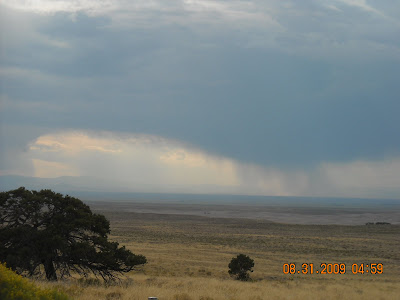 A shot of the San Luis Valley, which is located between the two mountains. Rain in the distance. 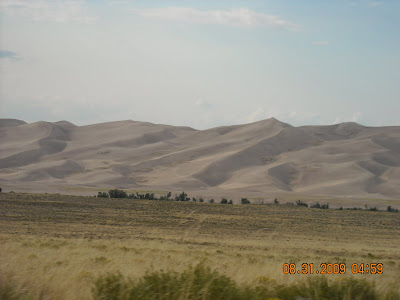 The dunes from the road. See the trees at base of dunes. 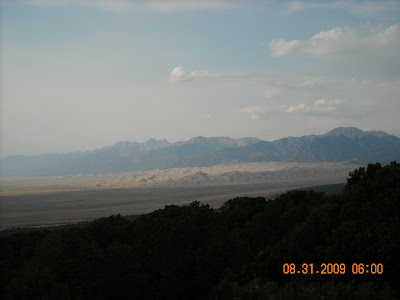 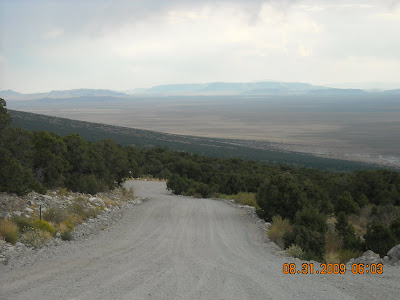 Another shot of the valley as we descend the unpaved wash board road on the Sangre De Cristo Mts., which means " Blood of Christ" in Spanish. The mountains look red at sunset. 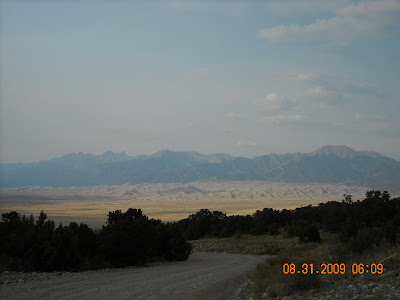 Shot of dunes on our way down the mountain.
Posted by diane-j-m at 9:17 PM