Today Diane wants to go downtown and see a shopping area that is called the Gaslamp District. 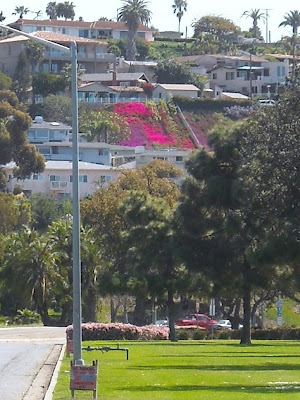 These flowers on the hill always caught our attention when we drove out of the Mission Bay RV Park to go to town. Today Diane took the picture of them as we drove out to get on the Highway. 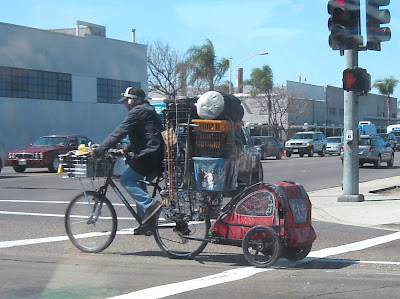 As we drive downtown Diane caught this homeless man and all his belongings, I guess you could say he is an RV'er in his own way. 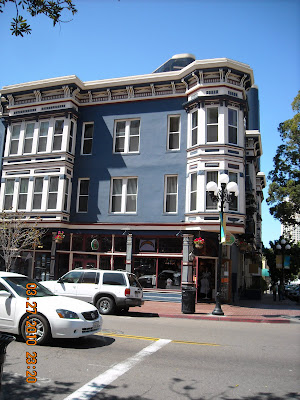 We enter the Gaslamp Quarter that has some of it's old buildings. This was the first attempt to establish a town on San Diego's waterfront in 1867. The prosperity however attracted prostitutes, gamblers, and western legends like Wyatt Earp, who ran three gambling halls. It remained a red-light district type of place until 1974 when the revitalization process began. 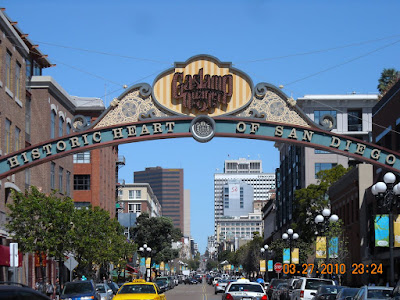 Here we are, now to find a parking spot? 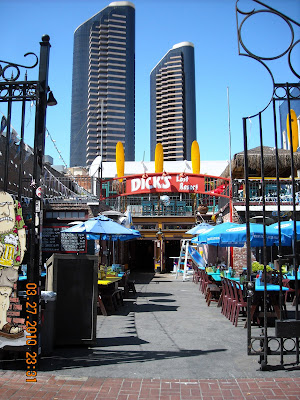 We found a parking spot and started to walk around. This was a funky restaurant call Dicks. Those yellow things above the Dick's sign are surf boards. 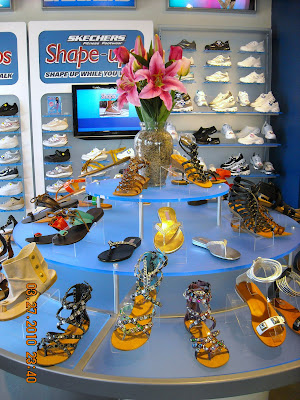 Naturally this shoe store caught Diane's eye. Diane said this is a great place for a girl to be, without her husband who hates to shop. 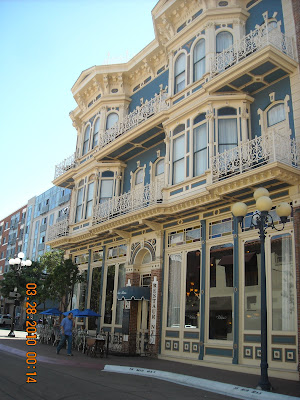 This historic hotel caught my eye. 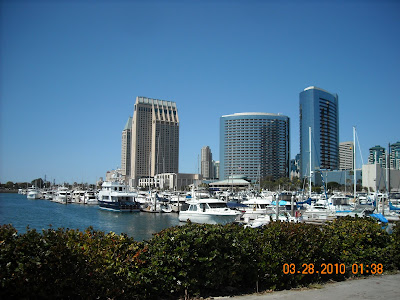 After walking around the Gaslamp Quarter, we stopped at this park to eat our sack lunches and enjoy the nice weather and great view of the bay. 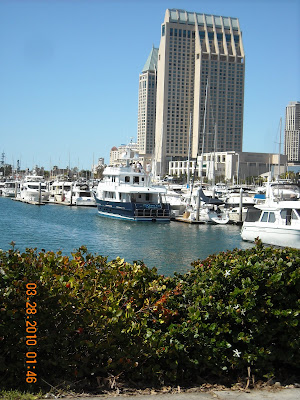 We watched some folks eat their lunch on the boat with the blue hull in this picture. 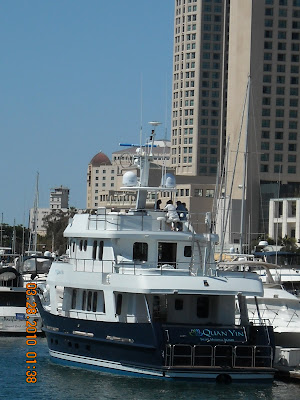 You can see them on the upper deck of this 3 level boat. 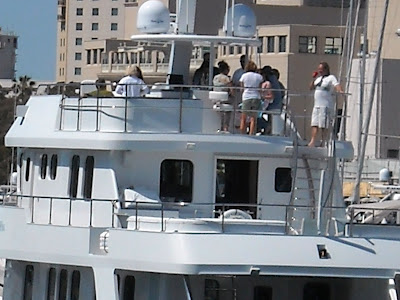 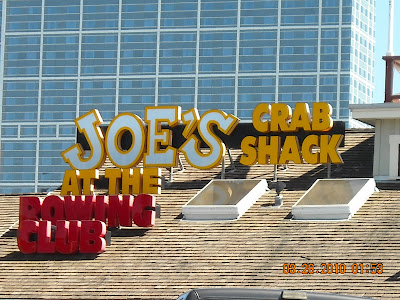 Diane is often saying that I am being crabby, so she couldn't resist taking this picture. 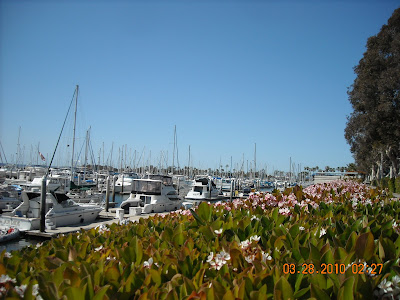 This was the place we were looking for the first day we were out for a quick overview of San Diego, but couldn't find it. The boat harbor was full of boats but I found the rest of it rather disappointing. 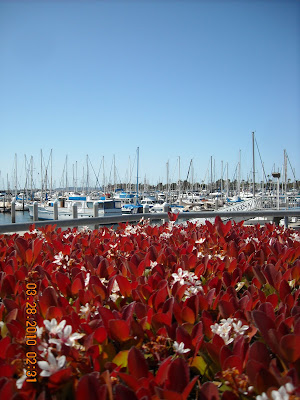 Diane found the beauty in the flowers, naturally. 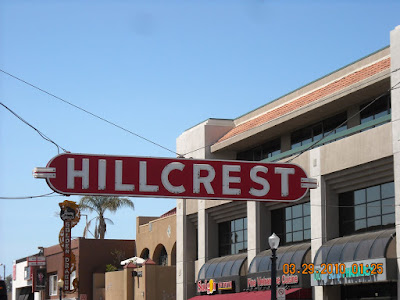 This is a neighborhood of San Diego that Diane read about. It is known for it's diversity and locally-owned businesses. It is also known as the "Village in the City". Hillcrest is said to be one of the most vibrant cities in the country and is nothing but new, when it comes to style and flare. At least that is what it said in the "101 Things to do in San Diego" magazine. We found it to look a little dirty from the streets, but with some nice little boutiques, cafes, restaurants, bars, and thrift stores. The magazine also said it had a European style feeling. Being we have not been to Europe, we can't tell you if it did. 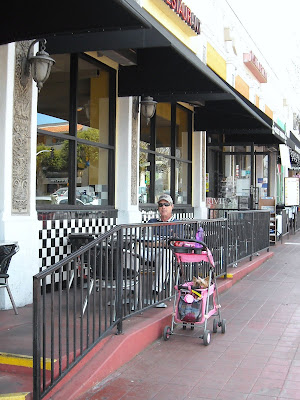 Diane treats Malley and I to lunch at a famous Deli in Hillcrest. It is know for everything being homemade. We eat outside, even though the inside is very fancy, (so Malley can join us, what my wife does to bring Malley along). 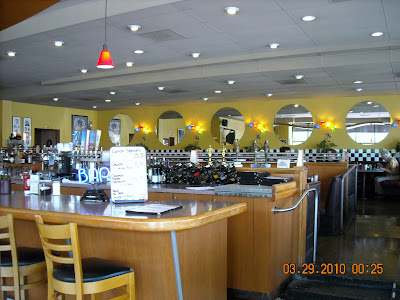 Picture of the inside of the deli. I would have rather eaten inside. 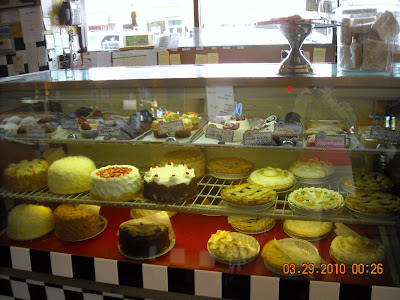 Of course Diane couldn't resist the dessert display. She treated both of us to a decadent dessert. 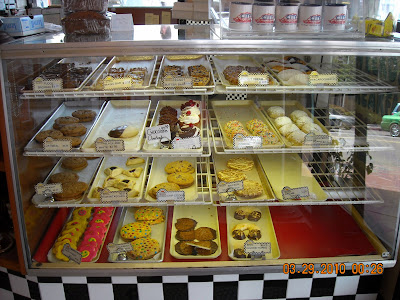 Choices, too many. And because Diane had a coupon for $10 off if you spend $30, our dessert was free. 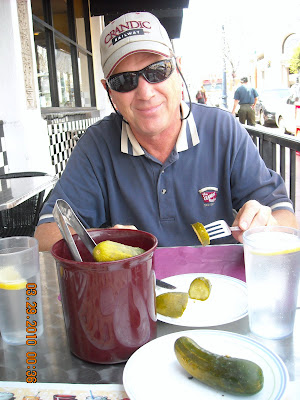 Time for a pickle appetiser. The jar of pickles came with the meal. 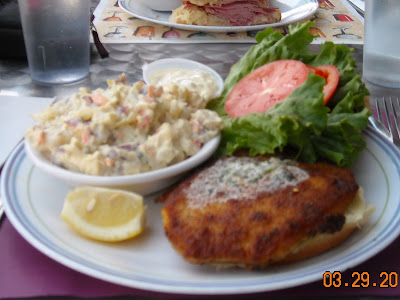 I had the calamari steak! Never had one before, it was very good, so was the homemade potato salad. Diane had the Ruben and potato salad. Check out Diane's new hat (it has a cross on it and it says, "Faith") she purchased in the Gaslamp Quarter along with two new pair of shoes. No picture of the shoes. 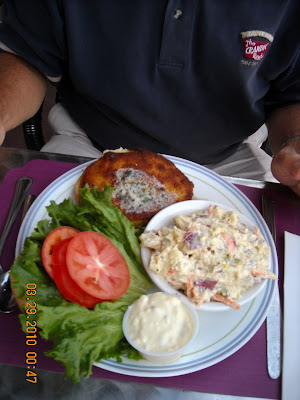 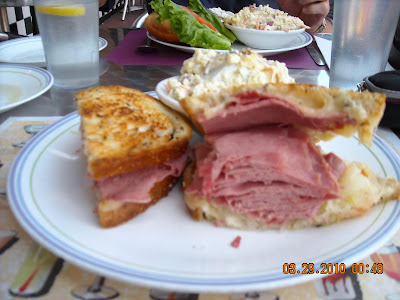 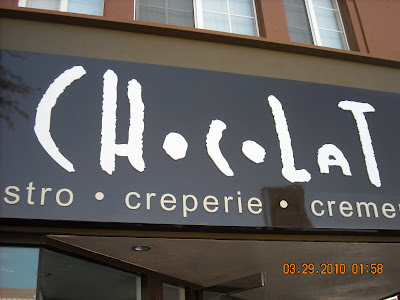 After lunch we past this chocolate shop that was rather interesting. 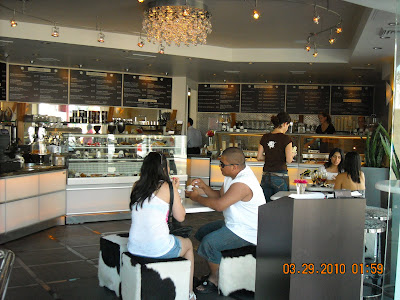 Check it out, not your usual desert shop. 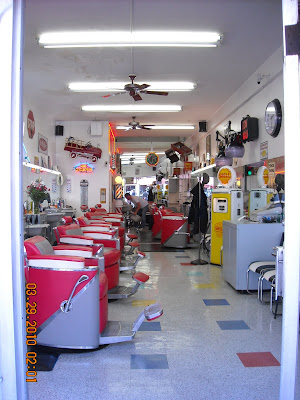 Diane couldn't resist this opportunity to snap this picture of a barber shop in Hillcrest. 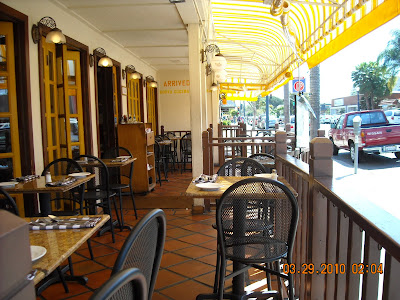 She also was attracted to this outdoor cafe.
Posted by diane-j-m at 1:28 PM